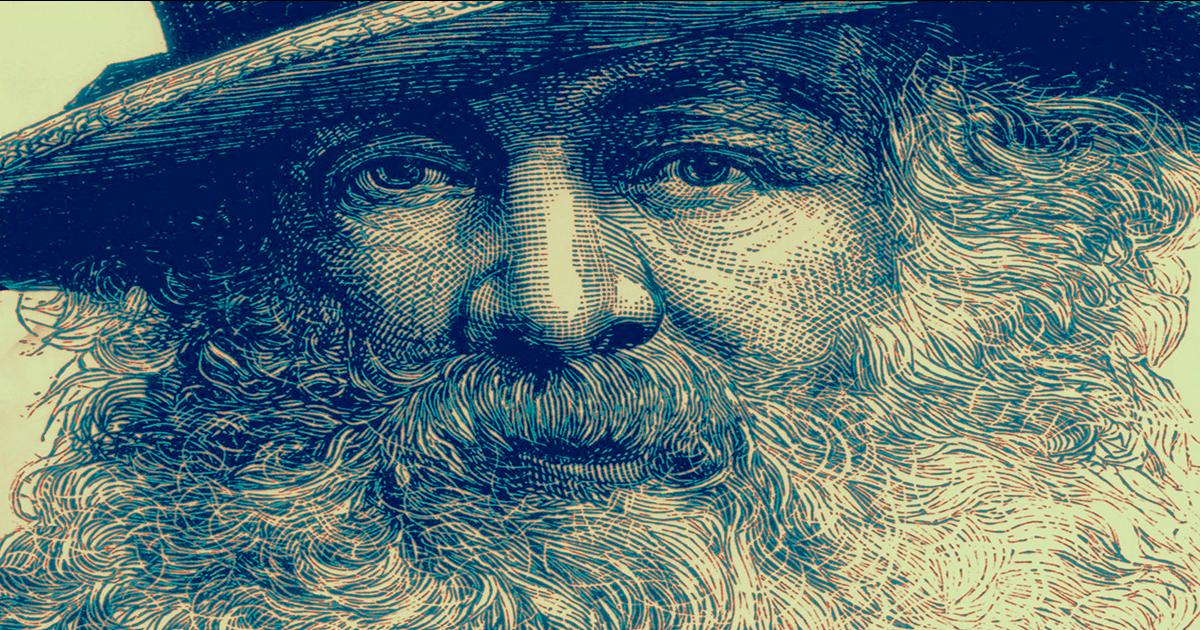 Born to a large, poor family in 1819, Walter Whitman was not thought to be anything special. Floating from job to job all around New York, he struggled financially for most of his early life. Through all this time, however, he was experiencing and learning things that would greatly inspire him as he began writing poetry. His first major publication, Leaves of Grass, earned him worldwide fame as many admired his practical writing style; they donned him “The Common Man”, a nickname that would survive the rest of his life. But Walt Whitman was a poet with contradictions and inconsistencies. In the infancy of America, pride was on full display. Inspired by these feelings, many pillars of nationalistic Transcendentalism is very prominent in his early works. However, later in his life, Whitman’s poetry takes on a more Realistic approach as he explores the darker sides of American life.

From rags to riches, Walt Whitman truly embodied the American Dream. In “I Hear America Singing”, he celebrates all the unique types of people that live in the United States, “I hear America singing, the varied carols I hear…Each singing what belongs to him or her and to none else” (l. 1, 9)

Whitman employed the use of catalogue when describing these people and how they each serve to create the very diverse society we have in America.

James E. Miller Jr. writes of this poem,‘I Hear America Singing’ presents an image of the nation that Americans would like to believe is true-an image of proud and healthy individualists engaged in productive and happy labor. Mechanic, carpenter, mason, boatman, deckhand, shoemaker, hatter, wood-cutter, plowboy-from city to country, from sea to land, the ‘varied carols’ reflect a genuine joy in the day’s creative labor that makes up the essence of the American dream or myth. . . . America singing emerges as a happy, individualistic, proudly procreative, and robustly comradely America” (Miller 146-147).

These uniquely American ideals that are prominent in Whitman’s poetry are also present in his form; he was a trailblazer in a relatively new form of writing called free verse. In his stanzas, Whitman wrote in a very vernacular and unapologetic way. This break from the common form and tone of the time period is why many consider Walt Whitman to be revolutionary. In “Song of Myself”, Whitman wrote this excerpt through the mind of a young woman looking at many men bathing in a river,
“Where are you off to, lady? for I see you, / You splash in the water there, yet stay stock still in your room. / Dancing and laughing along the beach came the twenty-ninth bather, / The rest did not see her, but she saw them and loved them. / The beards of the young men glisten’d with wet, it ran from their long hair,/ Little streams pass’d all over their bodies. / An unseen hand also pass’d over their bodies, / It descended tremblingly from their temples and ribs.” (l. 206-213)

For the 19th Century, this poem was considered overtly sensual by some of Whitman’s contemporaries. In fact, his own brother refused to read it. In this excerpt, however, the rough-and-tumble obdurate nature of Whitman’s poetry is on full display. He did not care about following any form or common trend that was popular and accepted; Whitman simply wrote what he wanted. James Miller writes of this poem, “Like most poetic works of genius, ‘Song of Myself’ has defied attempts to provide a definitive interpretation. In a very real sense, no reading of the poem has clarified the sum of its many mysteries” (Miller 99-100). In this way, Whitman is the epitome of the American man. He developed his individual style, and stuck by it. In response to the criticism, he kept a cool head. One of his favorite phrases during interviews was, “In poetry, there is no such thing as good or bad subjects, but good or bad poets.” In the last excerpt, there also is a little bit of Ralph Waldo Emerson.

He was another Transcendentalist writer who coined the term “Transparent Eyeball”, which essentially is just the quiet observation of nature. This idea exists in “Song of Myself” as the lady watches and fantasizes about the men. In “I Sing the Body Electric”, Whitman continues this while describing a woman, “Hair, bosom, hips, bend of legs, negligent falling hands, all diffused-mine too diffused…Be not ashamed, woman-your privilege encloses the rest, and the exit of the rest; / You are the gates of the body, and you are the gates of the soul.” (l. 57, 66-67). In this excerpt, Whitman is clearly celebrating the individual. By describing the traits of a woman in this positive manner, he is empowering women along the Democratic ideals of our nation. This philosophy aided in popularizing several progressive movements that sought women’s suffrage and improved rights throughout the nation. In addition, the religious allusion of “soul” appears in this passage. Later on in the poem, Whitman begins a lengthy catalogue of all the bodily and emotional features of a human body. He declares at the end, “O I say, these are not the parts and poems of the Body only, but of the Soul, / O I say now these are the Soul!” (l. 164-165) A major facet of Transcendentalism is the interconnectedness of nature and the soul. In this poem, Whitman is commentating on how “The voice, articulation, language, whispering, shouting aloud, / Food, drink, pulse, digestion, sweat, walking, swimming” (l. 153-154) and other daily functions we perform come together and form the basic fabric of our existence: our soul. At this time in the United States, the majority of people lived in rural communities.

In this way, Whitman was writing for the “Common Man”, as the Soul and several other allusions to religion find their way into his works. Whitman took the pillars of Transcendentalism and implemented them in his poetry in a way that Americans would find applicable and enjoyable.

During his adult life, Whitman witnessed the growing divide between the North and the South, and the terrible war that followed decades of hatred. Whitman’s poetry was not always optimistic; several times his poetry took on a more pessimistic Realist point of view. In “I Sit and Look Out”, he describes many atrocities, “I see, in low life, the mother misused by her children, dying, neglected, gaunt, / desperate; / I see the wife misused by her husband-I see the treacherous seducer of young / women; / I mark the ranklings of jealousy and unrequited love, attempted to be hid-I see these / sights on / the earth” This rant could be a sign of Whitman’s frustrations at the racism and hatred he is seeing on a daily basis. He ends the poem, “All these-All the meanness and agony without end, I sitting, look out upon, / See, hear, and am silent.” (l. 3-7)

But why would someone not do anything about these horrible things if they know they’re going on? That is exactly what Whitman is criticizing here. The “I” that Whitman is writing this poem through is not his first-person, but a metaphor of the American public. Whitman includes that line at the end as a culmination of all the evils; he is saying how being a bystander and letting all of those things go on unabated is just as terrible as the deeds themselves.

This is very applicable to the North’s tolerance and ignorance of slavery in the South. The main philosophy of Realism is telling the truth as it is without romanticizing anything. Having lived in New York for most of his life, Whitman saw many slaves being transported throughout the city and used that disgust he felt as inspiration for this poem. At the conclusion of the Civil War, Whitman was devastated by the assassination of President Lincoln.

He wrote several elegies for him, including “When Lilacs Last in the Dooryard Bloom’d”, “O Captain! My Captain!”, and “O Me! O Life!”. In “O Me! O Life!”, Whitman’s poetry symbolizes the immense sorrow that the nation was feeling: “Of the empty and useless years of the rest, with the rest me intertwined, / The question, O me! so sad, recurring–What good amid these, O me, O life?” (l. 6-7) It is clear that Whitman is in the middle of a crisis, endlessly searching for a faint idea of what life is actually about. This poem brings to focus the susceptibility of poets and authors to be influenced by current events. Especially for poets, whose works are generally inspired by personal emotion, Whitman likely used these intense feelings of despair as creative fuel. From the original 1855 edition of Leaves of Grass to 1867, the poetry collection grew from 12 poems to hundreds in just 12 years. Straying away from his earlier trends of Transcendentalism, Whitman turned towards Pessimism and Realism as the Union faced a political crisis during the mid-19th Century.

After a long life, in 1891 Walt Whitman published the final edition of Leaves of Grass while he was on his deathbed; the final collection consisted of over 400 poems. These poems and the stories they tell are why critics today refer to Whitman as “America’s Poet”. He lived during a time when America was still struggling with its identity and showed these problems through a Realist lens.

However, Whitman’s Transcendentalist poetry embodied everything that America stands for today: diversity and equality. As long as America holds these just ideals in her heart, Whitman’s poetry will live on.

On the Aesthetic Dimension | A Conversation with Herbert Marcuse

Contemporary Art and the Politics of Ecology – TJ Demos

Art and the People- Elisée Reclus

Ocean Vuong Is Still Learning | Interview at The New Yorker