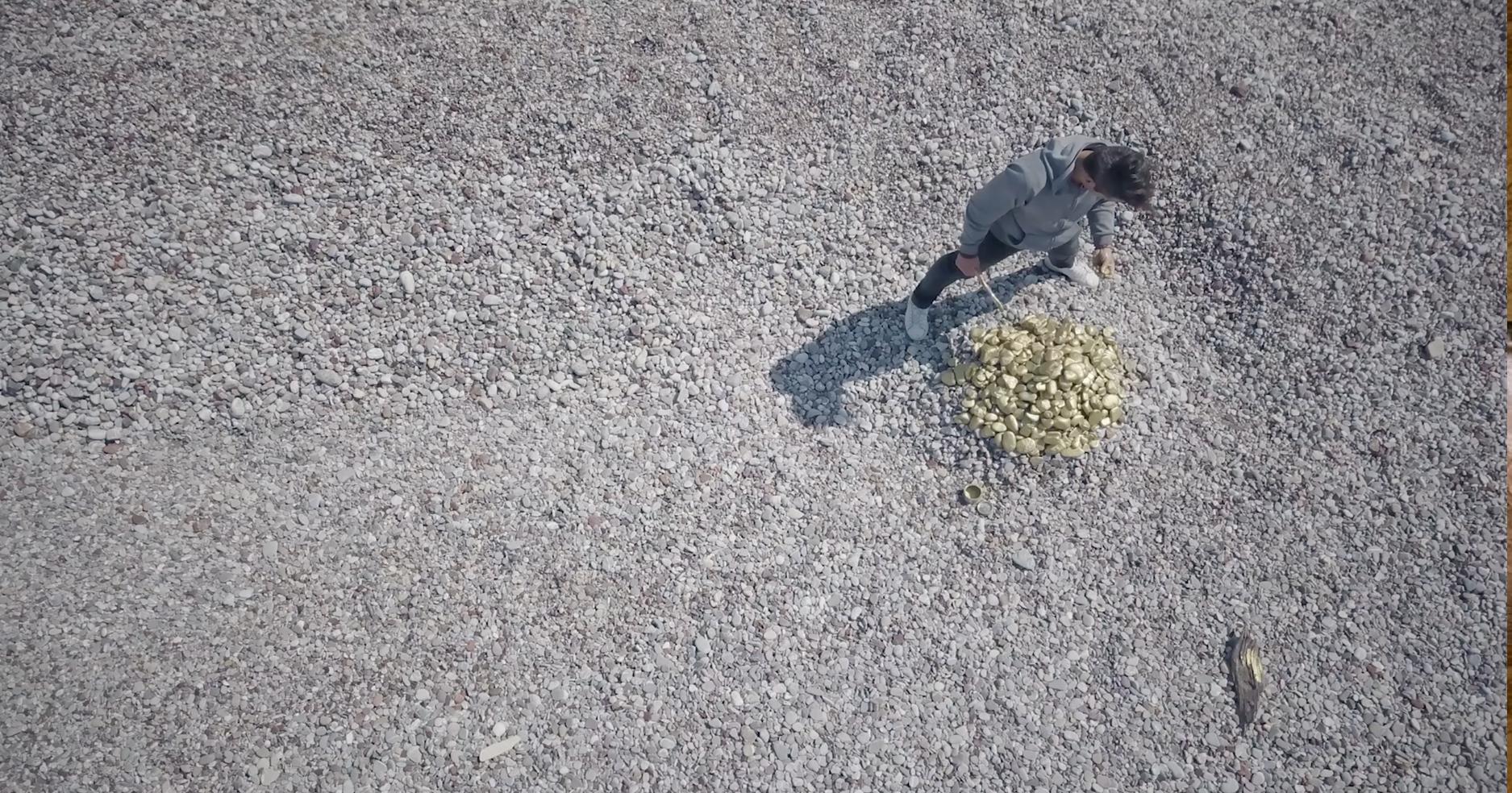 The first contact we had with you was through the International Video Poetry Festival. Do you classify your works in the category of film poetry or video art? Which art do you identify with the most?
Thank you for kindly inviting me in this interview and congratulations for the new initiative of Film Poetry. Indeed, I was part of the 4th International Video Poetry Festival 2015 with the piece Urban Halo, a walking-based video performance commissioned for Onassis Cultural Foundation Visual Dialogues exhibition (2013-14) dedicated to C.P. Cavafy. I am glad that we have the chance to discuss things. For sure, my early steps in my art practice and art education have been mostly associated with video art and audiovisual installations, before going into performance art and site-specific practices. I consider many of my artworks as walking poems; and I am glad that I have the chance to reflect on this, as the creation of an ephemeral atmosphere was always on the center of my attention. An atmosphere made of visual synthesis, of space or even of melody. A kind of atmosphere that gives birth to its next form, as the cloud gets liquefied and ready to become rain itself. For me, this was always a poem – and in this way I also perceive my art practice: from music melody and rhythm to a peripatetic gesture, an audiovisual synthesis or a text-based work. I gradually understood that the variety of elements (performance, video, text, sound) in my art practice are often developed around a personal minimum unit of light, a sparkle point for creation, revolutions and journeys. Thus, I think that while my early works are close enough to video art, my recent works (since 2014) are often linked to a poem or a poetic rubric which develops as a silent Sisyphean performance with objects into sites; or other times as walking interior monologue.

What’s your background? How has your practice change over time? Can you name five artists that have inspired, motivated, and influenced you?
My initial creative channel was music, which is still active and vital aspect. I was also attracted by maps and anything related to geographical imaginations. I was first enrolled as student of Geology (National and Kapodistrian University of Athens) attending modules as physical geography, geology, meteorology; before going into study contemporary art at the Department of Audio and Visual Arts, Ionian University. My first works of art were mostly audiovisual (single video art works, video installations). Later, when I moved to London for postgraduate studies, I attended the MA in Digital Arts (University of the Arts London). There, I had a turning point in my work, which was my shift in performance art when I started considering walking in the city as spatial writing with various forms of documentation. London was not just a city, but a complex urban experience which impacted on my new way of thinking while exploring the writings and insights of Baudelaire, Benjamin and Situationists for flaneur, urban experience and psychogeography. Such ideas constituted the background for my doctoral thesis at Goldsmiths University of London, where I explored and delineated a new hybrid flaneur for the 21st century globalised city through aesthetic, performative, sensory and technological aspects of walking in the city. Since then, poetry and objects are often part of my methodology towards walking performances for camera, site specific gestures in liminal sites and sea or even as text-based installations. The poetic verse changes medium: words, stones, coordinates, body gestures, steps, light and GPS. I could describe my art as an oscillation between the poetic and the technological. This was something I also researched as a postdoctoral project (funded by State Scholarships) on the link between site-specific walking performance, technology and Geohumanities. On 2016, I also published my first poetry book entitled Tundra (Pigi Publications), which revealed my interest on geopoetics / urban poetics.

Despite the artistic medium or field, I was always inspired by the audiovisual symbolism of Bill Viola, Douglas Gordon, John Baldessari, Barbara Kruger – the use of colour and atmospheres by Mark Rothko and Edward Hopper – the sculptural and land art of Richard Serra, Robert Smithson, Nancy Holt and Walter de Maria – the environments of Olafur Eliasson and Hans op de Beeck – the walking performances of Richard Long and Francis Alys – the multimedia poetry of Dimitris Papaioannou and the lightning gestures of Costis Triantafillou. I also appreciate and find commonalties between my thinking and a number of younger artists such as Yiannis Pappas, Virginia Mastrogiannaki, Bill Balaskas, Myrto Xanthopoulou, Kyriaki Goni, Isaac Cordal.

What is success? To what extent is success linked to happiness in the western world and how easy, impossible or naive is this in a world of extreme competition and fake news? What Does Your Art Mean to You?Well, this is a difficult question because I think of success as a path towards the desired result, which indicates duration. I don’t refer to success as a result per se but as an intention to create to set in motion the world and your mind in such a way that the final constellation will be yours and not you through the eyes of the others. On 2020, I directed a short video and for its purposes I thought of the rubric “to give shape on your intention is the biggest revolution”. I often return to this phrase as it combines happiness, success and creation. It is without doubt that an artist should take into consideration many parameters which include promotion and distribution of the work through complex and competitive networks or markets. Yet, I still believe that creativity, personal development and diligence are the key points to talent. At the end of the day, real art is always there to light our hearts up, to bridge, to reveal, to plant question marks, to become the herma of our orientation towards better or new aspects of the personal and the collective body.

What does your overall project represent and what topics have you dealt with? How can we get in touch, see, hear your works? What are you preparing for the near future and how difficult is it to exist as an artist in this quagmire of pandemics?
Many of my recent artworks have been ambulatory/performative actions or poems across cities, urban peripheries and recently upon seas. However, it is of great interest that such works have the same particular concepts hidden in their backbone. A central concept in many works of mine is the idea of transience. I often identify a new language on the ephemerality of time, body and place; a liminal feeling almost of a spiritual quality; something not divided from the everyday but at the very centre of it. Baudelaire described the artist-flaneur as someone who tries to ‘distil the eternal from the transient’ in the midst of anonymous crowd. Indeed, the observation of the transient has been one of my main motifs, but the inclusion of flanerie and psychogeography in my art practice shifted such perspectives. What is more, the idea of the city is also a significant concept for me; a public space to conduct various ‘botanizings’ on the material and immaterial layers of the urban (departing from the famous Benjaminian metaphor of ‘botanizing on the asphalt’). In other words, I consider city as a mirror of the human: dynamic, flowing, aesthetic, political, sensory, everyday. Let’s think of city and mind as a metaphorical oscillating system: landscapes of potential; both ephemeral and universal at the same time. Other times, I approached city with geological attentiveness through 3 processes: walking, writing, thinking. Such shifts in my art thinking revealed more recent works where I focused on the connection between performance, text and site as a kind of geopoetics. For example, in my latest series of works (Territorial Poetics 2019-2020), the trialectic of site, body and object made apparent spatialised poems where words had often coordinates and trajectories. A significant shift on this was my interest on the fruitful connection between sea and performance art. In particular, sea as a co-performing agent of my gesture as in the case of Objects in Odysseys (2020-) and Islet (2021-) where the poetic condition is not just words but light (Morse code), trajectories of objects-verses integrated with GPS floating across the sea.

I understand my art practice as a gesturing: a kind of expanded poetry where body, walking, words, sites, objects and coordinates are carefully woven into a thin textile of the idea. Then, I let myself free to get into action (performance) without a prejudged result. Most of my performances in public space have been more as spatial poetries rather than choreographic movements. For 2022, there are plans for further series of my work in progress ‘Islet’ (a sea-performance based on the transmission of a poetic verse through light Morse code), as well as the writing of a chapter on the dynamic link between sea and performance art, for a forthcoming book. Thank you for your time and interesting conversation!

Bill Psarras is an artist and academic. He is Assistant Professor at the Department of Performing and Digital Arts, Faculty of Fine Arts, University of the Peloponnese. His works have been exhibited in various International festivals, group exhibitions and cultural institutions across Europe and US. More info: www.billpsarras.com

The Prism Prize for Climate Literature

The Institute for Experimental Arts

Every Carcass Like A Diamond by Chris Turner | UK

Every Carcass Like A Diamond by Chris Turner | UK

Twilight in the Sculpture Forest by James Morehead

Ocean Vuong Is Still Learning | Interview at The New Yorker